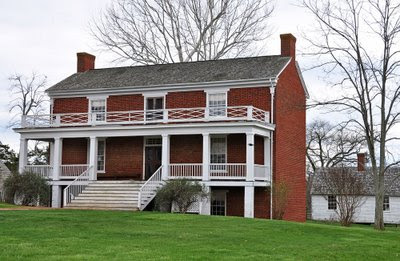 On our recent trip to Colonial Williamsburg, we stopped at Appomattox Court House National Historic Park. Located in middle Virginia, this is a hallowed Civil War site. On April 9, 1865, Robert E. Lee, commanding general of the Army of Northern Virginia, surrendered his men to Ulysses S. Grant, general-in-chief of all U.S. forces. Though several Confederate armies remained in the field, Lee’s surrender signaled the end of the Southern States’ attempt create a separate nation. Three days later, Lee’s men marched before the Union Army, laid down their flags, stacked their weapons, and then began their journeys home.

When Generals Grant and Lee sat down in the parlor of the McLean home, Grant asked only that the Confederates pledge not to take up arms against the U.S. Conferderate officers were allowed to keep their side arms and any solider who owned a horse was allowed to take it home as well. The surrender terms were used as a model for the other surrenders that would soon follow. When Lee mentioned that his men had been without rations for several days, Grant arranged for 25,000 rations to be sent to the hungry men. The characters of Lee and Grant were of such a high order that the surrender has been called “The Gentlemen’s Agreement”.

It was an overcast day when we visited, and the dark clouds added to the somberness of the old village. We could feel the history and spirits around us as we walked the grounds and toured the restored buildings. If you have any interest in Civil War history, this site should undoubtedly be on your list of places to visit.

Please click on the link below to view a slideshow of some of my photographs. Enjoy!