It’s time for A Personal Photo Challenge! “Simplicity” is the theme this month.

Like many photographers, I’m guilty of sometimes creating compositions that are too busy. It is a constant battle to reduce the clutter and simplify the subject matter. Posting Wordless Wednesday images here on my blog and Flickr has helped me in achieving this goal because I assign titles to my images. So here’s a tip – think of an appropriate title for your photo before clicking the shutter. It will make you think twice about your composition!

I prepared only one image for this challenge. Unfortunately, it took more time than I intended! I started off with a rather artsy image in my head. Then I attempted to recreate it with recorded pixels and Photoshop editing. I placed a small, hand-carved rabbit on a base surface of white scrapbook paper. With the camera mounted on a tripod, I moved a light source at various angles to achieve a long shadow that was also at an angle. (If I had it to do over again, I would have set up the camera with a lower perspective rather than a bird’s eye view.)

In post-processing, I darkened the shadow, removed hot spots, slightly desaturated the carving, and added overall contrast. The pattern overlay of weaved threads was added directly onto the image (not on a separate layer) with a soft light blending mode applied at reduced opacity, and a mask painted over the carving to eliminate the applied pattern. I tried this technique quite by accident and discovered that the pattern disappeared gradually in the lighter areas, as hoped.

So I made myself learn something from this exercise and kept to the “simplicity” theme. I hope you like the end result, even if I made your eyes glazed over with my explanation, LOL! 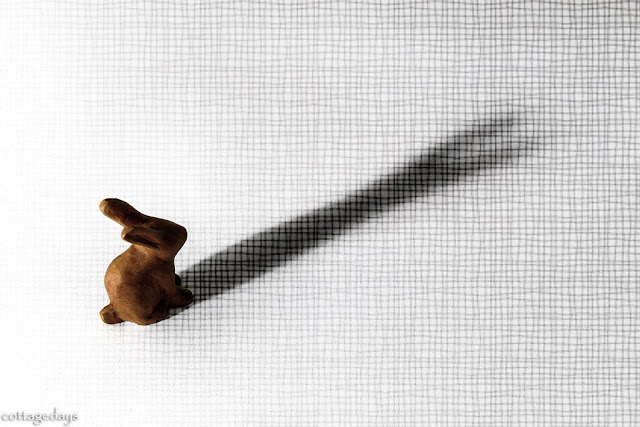 Now that you’ve seen my photo and read my post, I hope you will hop over to A Personal Photo Challenge blog and check out the creative efforts of other participants. Thank you so much!
Created by Donna at 4/13/2013