Time for a new Brenda Photo Challenge! The theme is Keeping Cool. Our current challenge hostess, Judy of The Road to Here, picked the theme. Thank you, Judy! For this challenge, I am going to take you on a little virtual trip to a magical spot in Jasper National Park in Alberta, Canada! The destination is Mount Edith Cavell, located in the Athabasca and Astoria River valleys and a few miles south of the town of Jasper. The mountain was named in 1916 for Edith Cavell, an English nurse executed by the Germans during World War I for helping allied soldiers escape from occupied Belgium to the Netherlands.

When we went on a Canadian Rockies and heli-hiking tour in 2005, we took advantage of a free afternoon and headed up with a local guide to see the grandeur of Mount Edith Cavell up-close. What better way to cool off in the summer than to head to the mountains for a little hike? As we wound around narrow gravel road leading up the base of the mountain, we were greeted with this spectacular view of the north face, reaching up 3363 meters to the sky. The photograph was taken at f/10 and 1/320 second. 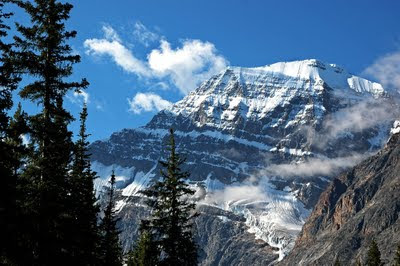 Once we parked the vehicle and began our hike on the pebbled trail, we could see some of the valley below the mountain and also peek at the glacier tucked into the right-hand side of the mountain. The camera settings were f/9 and 1/320 second. 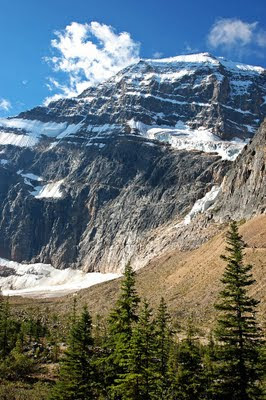 As we got closer, we were treated to a good view of Angel Glacier, which spills over 300 meters on the north face cliff. More than an angel, the glacier reminded me of a white dove, with its outstretched wings. The photograph was taken at f/10 and 1/320 second. 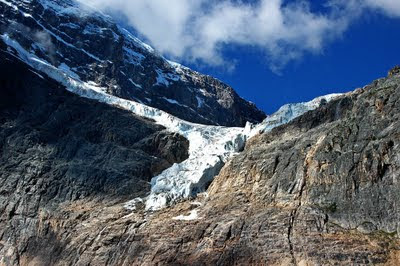 The Path of the Glacier Trail led us down to the Cavell Lake, sitting at the base of the mountain. The lake gets its turquoise color from the concentration of glacial silt. The air temperature was noticeably cooler as we descended into the valley. The camera settings were f/10 and 1/400 second. 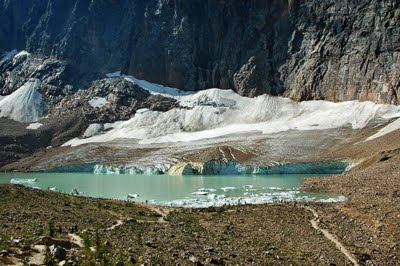 When we reached the lake’s edge, we saw many “bergy bits” floating in the lake. We paused to enjoy this remote and treasured spot of natural beauty, and breathed in the cool mountain air. The photograph was taken at f/10 and 1/400 second. 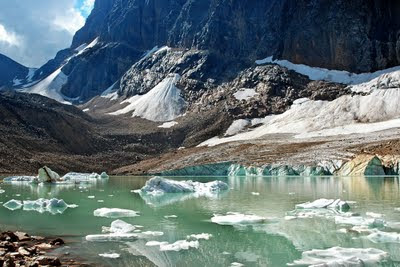 After a brief rest, we strolled back down the trail and admired the green valley and mountain peaks in the distance. The camera settings were f/9 and 1/320 second. 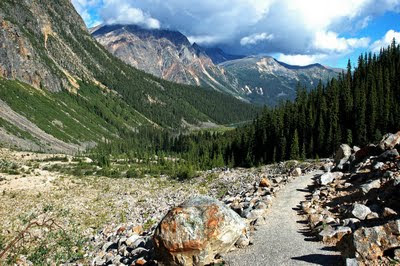 I hope that this little photographic jaunt helped to cool you off!
Created by Donna at 8/01/2009