I confessed back in June that I was traveling up to Berea, Kentucky, to take a Santa-making class by nationally known doll artist, Lindy Evans. The 4-foot Santa shown below is an example of her work (photo by Jim). Her creations are exquisitely detailed, life-like, and very much sought after by collectors. 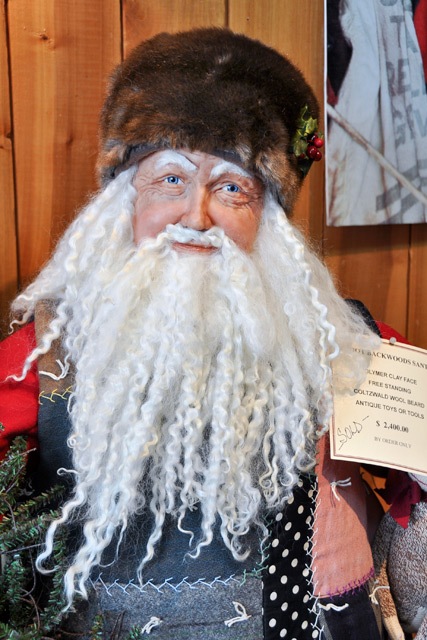 I successfully completed her one-day class, though I could have easily used another day to work on my personal Santa creation. Since I had never done any sculpting before or worked with polymer clay, I was incredibly slow and frequently felt inept. I was convinced that my new fellow was going to look like a bedraggled Gimli after a weekend bender of hot buttered rum. It turns out that he appears to look more like Gandalf, much to my relief. Here he is, standing proudly in our master bedroom! 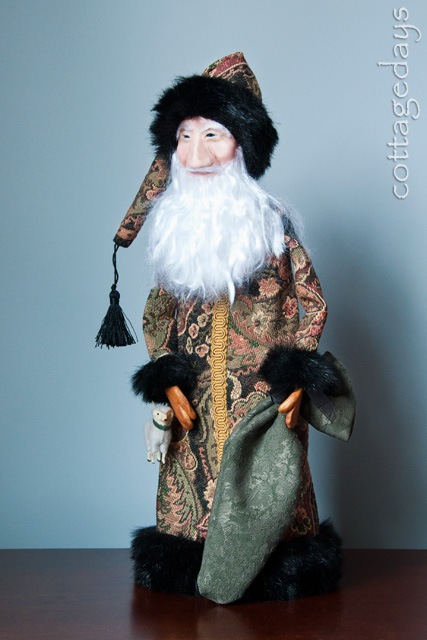 Lindy prepared kits for us ahead of time, so that helped immensely. A wire frame serves as the foundation. No sewing was required in the construction of the outfit. Hot glue and scissors made quick work of the tapestry fabric coat, hat, and fur trim. The bag was already made. Polymer clay was used to make the head and mittens.

We spent the whole class morning sculpting the head. There is quite an art and science to making anatomical features! Lindy went a bit too fast for me (okay, a lot fast, LOL), and I made Santa’s nose too big. By the time I put it on and realized my mistake, she was zipping on to the next step. There was no time for redo’s! Just slap it on there and make the best of it. So let’s just say that my Santa has a decidedly German-style honker of a nose! I could have also fussed quite a while with his hair, but that was another slap-it-on-and-go kind of step. 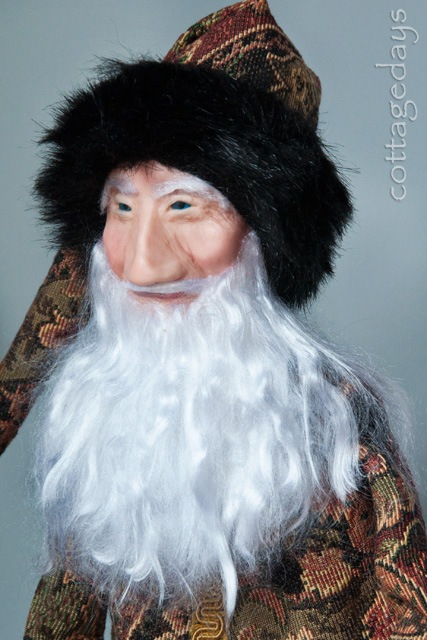 So my handmade Santa is a true piece of folk art, complete with imperfections. I signed and dated the base under his robe. Perhaps it will make a dollar or two at my estate sale after I kick the proverbial bucket! I may get around to making some more of these later on, since the mystery of construction has been cleared up and I now have a tiny bit of polymer clay experience. But don’t hold me to it! This may very well be a one-of-a-kind piece!